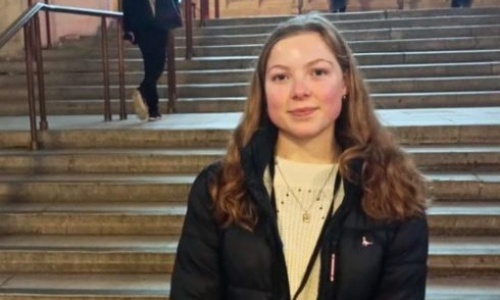 Elodie in Year 12 explains more:  Last week, I attended a debate in the House of Commons over whether public sexual harassment should be made a crime.

This was following a meeting I had with my MP, Greg Clark, in April, where I asked him to support Plan International UK and Our Streets Now’s Crime Not Compliment campaign as well as to consider putting forward a bill to criminalise public sexual harassment if he were drawn in the Private Members’ Bill Ballot. Although the meeting was long and tough and I left feeling that he was unaware of the issue, I was surprised and excited to hear a few months later that he had been drawn in the ballot and chosen my Bill to put forward. I met with him twice more to discuss the technical details of the Bill and to help make suggestions to prepare his speech in Parliament, which he invited me to watch on Friday 9th December.

I became involved in this campaign through volunteering as a Youth Advisor for Plan International UK. Working with the charity, I heard other young people’s experiences of public sexual harassment and realised that it was something that had affected me too! I just hadn’t realised how prevalent public sexual harassment was because it is so normalised. Even if you don’t regularly experience harassment, everyone is affected by expectations that, girls especially, should dress or behave differently to avoid it.

It felt so surreal to be in the House of Commons, especially knowing that the debate I was watching between MPs would never have happened if I hadn’t have been brave enough to email and persuade my MP that it was a problem! I was also interested to watch how debates happen in real life and learn first-hand about different rules and conventions of the House of Commons.

It was very encouraging to see that everyone in the room was supportive of the cause and other MPs had been listening to their constituents when I could remember a year ago, when I joined the campaign and even in my first meeting with my MP, people were very dismissive of the issue. I was very proud to be mentioned in Greg Clark’s speech and to hear him say exact points and quotes that I had suggested to him. The Bill received overwhelming support and passed so is now very likely to be made into law if it passes committee stage (technical amendments to the legal text) and the House of Lords. Seeing the Bill pass and seeing other MPs that I had met with in my time campaigning supporting the Bill felt like all my hard work had paid off. To top off the day, I went home and saw that the public sexual harassment Bill was on the news!

I am not sure if I want to go into politics in the future, but it was very empowering to know that it is possible for anyone, even a 16-year-old girl, to make a real change in politics!